Culture brings artist Diana Larrea to Sala Veronicas with ‘I exist, you exist, we exist’. 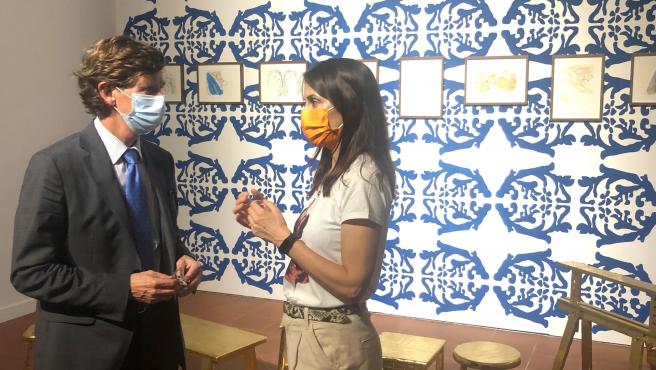 Larrea brings to the space of the Institute of Cultural Industries and the Arts the result of the works she makes inspired by the research and dissemination she is doing in social networks in recent years on women artists since the Middle Ages and have a high component of disclosure to publicize these creators who are virtually unknown to society as a whole.

The general director of the Institute of Cultural Industries and the Arts, José Ramón Palazón, visited the work of mounting the pieces in the Verónicas Hall this week and stressed that “Diana Larrea will present the creations made from the research and work that began four years ago to publicize and give value to women artists since the Middle Ages.”

Three works based on the same discourse and inspired by the ‘online’ artistic action that Diana Larrea has been carrying out since 2017 through her personal profile on social networks will be on display at the Sala Verónicas. The action is called ‘Such a day like today’ and is a hybrid work of historical research and cultural dissemination.

Diana Larrea (Madrid, 1972) is a multidisciplinary visual artist who throughout a long professional career has used in her works different plastic languages such as installation, video, photography, urban interventions or drawing. Within the diversity and versatility of her artistic proposals, she has always maintained a personal commitment to certain symbolic conflicts, both contemporary and from the historical past.

His artistic projects have been awarded grants and prizes by various institutions and his works have been exhibited at the Museu Nacional do Conjunto Cultural da Republica in Brasilia (Brazil), at the National Centre of Contemporary Art in Moscow (Russia), the Kunsthall Charlottenborg in Copenhagen (Denmark), at the Sala kubo-kutxa in Donostia (Basque Country), at the EACC Espai d’Art Contemporani de Castelló, at the Espai 13 of the Fundació Joan Miró in Barcelona, at the Centre del Carme Cultura Contemporanea (Valencia), at the Fundació Sa Nostra and the Casal Solleric in Palma de Mallorca, at the Centro Cibeles (Madrid), at Tabacalera Promoción del Arte (Madrid) and at the CA2M Centro de Arte Dos de Mayo of the Community of Madrid.

His work has also been seen at international fairs such as PULSE New York Contemporary Art Fair, MACO México arte contemporáneo and CIGE 5th China International Gallery Exposition (Beijing) and last year he presented his creations at ARCO 2020 with the Espacio Mínimo Gallery. His work is present in relevant collections such as the Marcelino Botín Foundation (Santander), the MACUF Contemporary Art Museum Unión FENOSA (A Coruña), the Consejo Superior de Deportes (Ministry of Education and Science), the Unicaja Contemporary Art Collection (Málaga), the BBVA Foundation, the National Library (Madrid), or the Centro de Arte Dos de Mayo CA2M of the Community of Madrid in Móstoles.